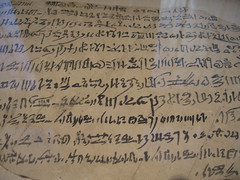 There’s a tremendous lot of junk out there on ancient Egypt. Pyramid Power and Ancient Astronauts are the most obvious examples. But there are many less-obvious sources of misinformation lying in wait for us. For example, there are many copyright-free 19th-century Egyptology texts available for download. “Yay, free stuffs!!!” 😀 But they can be highly-colored by the preconceptions of the day. The crazy, contradictory, polyvalent complexity of ancient polytheism just didn’t sit well with those academic “rationalists” weaned on abstractions. The people who built sophisticated structures and had a high degree of material culture just couldn’t have been immersed in magic and superstition, could they? A lot of the ideas passed along to us in those texts are very obsolete from a modern perspective.

There’s also the “seen it everywhere” effect. A lot of website authors copy or ‘steal’ from others without providing links or mentioning their source.  When you see something repeated on one website after another, it’s easy to assume that what they’re saying is common knowledge. You can really see the copying in action if you search for one of the lesser-known deities. The same few sentences, with the same wording, show up on a dozen sites. They all copy from each other. And so misinformation spreads.

Sarduriur has written an Academic Sources Guide for the Unversed, to help you judge the quality of information you’re finding.

This isn’t to say that all personal opinion and thought is invalid. If it were, I shouldn’t be writing this blog! We’re building a living faith, so there’s definitely room for the personal, but it shouldn’t masquerade as historically-valid “truth”. In other words, use good bricks for your foundations.