Kemetic Reconstruction, Revival, Reform. We “know” what the words mean in this context, but nobody else seems to. When we mention our path, others have the impression that it’s a soulless attempt to re-create a past that can never come again. Hidebound. Un-creative copying. If it’s not in some dusty, beetle-chewed papyrus, we just don’t care.

So what is Reconstruction, exactly? Here’s a good definition from Tess Dawson’s Introduction to Canaanite Polytheism, and most of it applies to Kemeticism as well:

What is Reconstructionism, Revivalism?

Reenacting the Canaanite faith exactly as the ancients would have practiced it is neither feasible nor desirable. It is not feasible because information has been lost and destroyed throughout time (even though we have at least 1500 Canaanite primary documents available), and it is not desirable because the cultures in which we live are profoundly different from the ancients’ cultures. Ancient times were not idyllic places to live: lives were short and often difficult. Slavery and fewer women’s rights made life even harder for some groups. A realistic Reconstructionists avoids the trap of idealizing or romanticizing the past.

Reconstructionism has drawn criticism over the years. Critics believe that Reconstructionists become too strict in their ways, worry so much about doing rituals exactly as they were done long ago that they do nothing at all, or are escapists. Many Reconstructionists leave room in their practices for modern necesities, while still respecting and honoring themes, processes, and structures important to ancient peoples. Most Reconstructionists are rational, down-to-earth and honest about their approach to religion, and fully grounded in modern reality. I’ve not yet met one who says, “Let’s never use a flush toilet again–we should switch to latrines and privies like our venerated ancients used!”

I prefer the term “revivalism” because the term “reconstructionism” is largely misunderstood; because I believe that reconstructing the past exactly as it was is undesirable and unfeasible; and because I respect thoughtful modern necesities.

Some modern Canaanite polytheists would call themselves Reconstructionists, but others do not.

I think that’s a great start on articulating the ideal. But when we use the word “reconstruction”, our listeners don’t make those assumptions. “Revival” has the same problem, with the addition of Christian camp meeting overtones.

“Reform?” Same thing, with the addition of delinquency. As if we used to egg the Temple of Amun, or steal Hathor’s barque for a joyride down the Nile.

Somehow, this recon term seems to awake hostility between the “fluffies” who don’t care about history, and the stale “recons” who care about nothing else.

Ironically, I’m familiar with this same debate, but in a musical context instead of a religious or faanish one. Most of my college work was in the performance of early music (European music of the Renaissance and Baroque periods, mainly.) The same thing happened. 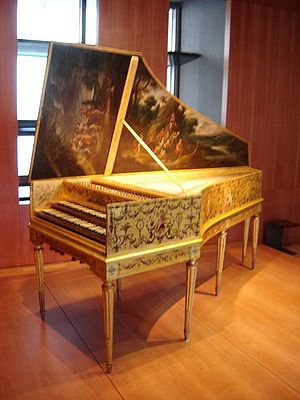 One of the battles was over who gets to play the music of J.S. Bach. He wrote a lot of music for harpsichord, and the piano was pretty-much not invented yet. After he died, his music fell out of fashion, and people forgot how to play it. They stopped playing harpsichord too. Pianists started playing his music again in the 19th century, but the original playing style had been forgotten. They played his music just like they played everything else. A lot of people thought it was fussy and dull, but it was old music. What would you expect?

Then around the year 1900, people started building harpsichords again, and digging out old books to figure out how to play the older style of music. The results gradually got better as people filled in more missing pieces to the puzzle. The harpsichordists started using terms like “authentic performance” to describe their performances and recordings.

This angered the pianists. “What do you mean I’m not authentic? I’m pouring heaps of real emotion into this!”

“But you’re playing all styles of music the same way,” the harpsichordists would reply. “and different styles of music need different approaches. If you played jazz that way, people would throw rocks at you. You’re playing a dance piece at a tempo that would require the dancer to levitate for thirty seconds, and you’re using a tuning system that makes the harmony non-functional, stupid, and quaint.”

Then the pianists would call the harpsichordists fumbling amateurs, who spend too much time pouring over dry books. Besides, they tried a harpsichord once and it wasn’t a proper piano, so was an obviously inferior instrument. Why bother with something old-fashioned and flawed?

Sound familiar? One group of people, doing something that seems to deal with history, working mainly with emotional intuition and adapting methods they’re familiar with, and another group using historical data as a source of inspiration, and trying to see how it can be used today.

Today, most of that musical hostility has died down. One of the things that may have helped has been the gradual replacement of the term “authentic” with  “Historically-Informed Performance“, or HIP. To quote the Wikipedia article:

I’m beginning to think a term like “Historically-Informed Polytheism” or “Historically-Informed Pagan” would be more useful than “Reconstructionist.” It’s a more accurate description, and moves away from the idea that you’re trying to build huge stone temples or have a king with earthly political power.  Instead, you’re using what you learn about ancient Egyptian religion to inform and inspire your practice.

The equivalent of “retraining the listener” has a place too. “Re-training your head.” If there’s an ’embarrassing’ or unappealing element, like polytheism, execration, or zoolatry, perhaps the best option is to learn more about it before rejecting it. There’s still the option of saying “No, don’t like it, it’s too messed up for me” later.

What do you think? Could this be a more useful and accurate term? If we believe in the Heka power of words, perhaps using the right one will make a difference.

Manage Cookie Consent
To provide the best experiences, we use technologies like cookies to store and/or access device information. Consenting to these technologies will allow us to process data such as browsing behavior or unique IDs on this site. Not consenting or withdrawing consent, may adversely affect certain features and functions.
Manage options Manage services Manage vendors Read more about these purposes
View preferences
{title} {title} {title}