P. Sufenas Virius Lupus has written a thoughtful post on the place of the gods in modern paganism (or lack thereof.) Bringing Back the Gods. It dovetails nicely with my previous Faith & Hubris link.

“For a long time now, I’ve been hearing modern Paganism characterized as a “nature religion” or an “earth-based religion.” That is true to an extent (and in some cases, far less true than others—and not necessarily in a negative sense). However, I suspect a huge reason that it is characterized that way—especially to non-Pagans—is because of fear of being thought foolish or “primitive” for recognizing the gods. We have then internalized that dialogue and have spent lots of virtual and actual ink on determining whether or not one group or another is truly “earth-based,” when in fact that understanding in itself might be more of a problem than an accurate portrayal.”

I think if we’re not going to take our toys and stomp off to our own Polytheist camp (which is certainly an attractive option sometimes,) we need to start challenging blanket statements about earth-centered-ness, and “everyone views them simply as archetypes” whenever we see them. And learn to do it effectively. 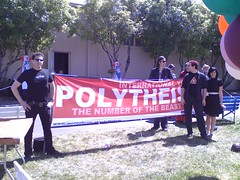 It is possible to do “Introduction to Paganism” resources that acknowledge that there’s a lot more out there than Wicca and Wiccan-ish practice. Promoting those over narrow ones is an excellent approach.